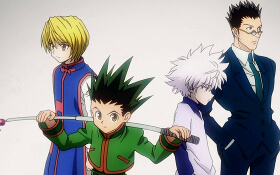 This quiz contains 10 questions. Either the answer is correct or incorrect, the quiz will be continued until the end. Moreover, in case you don't finish the quiz with a perfect score on your first try, then it's good to re-take it to see all the correct answers and their explanations! Refresh the memory of your favorite childhood anime. Can you score 10/10 with ease? Have you watched literally every episode of Hunter X Hunter? Can you name literally every one of the main characters? Nothing is holding you back from starting this quiz then! Good luck!
Start

What makes Hunter X Hunter different than other Animes?

Hunter x Hunter this is a lot of people's favorite shounen. Some even consider this to be the best Manga out there. But what is it that makes this series so popular? That a large fanbase is still raving about it years later - since the first chapter of Manga in 1998? Hunter x Hunter doesn't use any original structure, no original characters, and everything looks like a normal fight-shounen at first. The introduction to this series will probably leave some people cold at first, who know anime with imaginative backgrounds like Fairy Tail, epic like Dragon Ball Z, or automatically cool-sounding settings like Ninja World ala Naruto. HxH only blossoms in the latter course. When enough characters have appeared, fighting systems are introduced and after a few experiments with different elements, as is the case in the first story section. If you break off the series after a few episodes, you miss a multi-layered Shounen, which is as exciting as it is profound.

Hunter X Hunter follows the story of a twelve yeared old boy named Gon Freecss. Gon's main goal at the beginning of the series is to find his dad Ging Freecss, a man that has left his family to become a hunter. Hunters form the elite of society. These elite members can track down hidden treasures, rare creatures, or hunt down other individuals. They enjoy many privileges that ordinary people without a Hunter license do not have. Still, to obtain a license, one must pass the rigorous annual Hunter Examination run by the Hunter Association, which has a success rate of less than one in a hundred thousand. Gun then tries to become a hunter to find out why his dad left him and why his father chose the hunter life instead of raising Gun. On his journey, Gon Freeccs undergoes rigorous training and befriends others who also want to become hunters. Together they face numerous adventurous.
Start